This was 20 year old primi , who was sent for routine anomaly scan around 22 weeks of gestation. There was no history of consanguinity. She had undergone 2 scans earlier , one at 7 weeks and another at 9 weeks. In between ,according to the patient she was not advised scan when she went for her ante natal clinical check ups.

The scan revealed anencephaly , which would have been picked up , if  a scan had been done any time after   12 weeks of gestation. That was a depressing thought.

3d images are given below 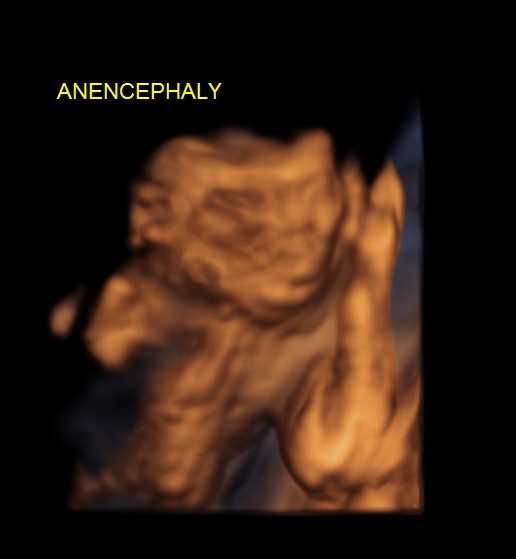 The heart could not be studied in detail ; the situs appeared to be normal.

The kidneys had horse shoe appearance.

the next is a tomographic ultrasound image.

This fetus had anencephaly , horse shoe kidneys and abnormal appearance of spine .

Between 13 and 33 percent of infants born with anencephaly have defects of the non-neural organs.

2 to 31 percent of infants with anencephaly have other minor developmental abnormalities, such as single umbilical artery, patent ductus arteriosus, and patent foramen ovale.

Generalized hypoplasia of the heart occurs in 4 to 16 percent.

Neural heterotopias, most likely seeded through the amniotic fluid, can occur in the lung. Hypoplastic lungs have been noted in 5 to 34 percent of infants with anencephaly .

Diaphragmatic hernia in 2 to 6 percent, and abdominal-wall defects in 1 to 16 percent.

Gut malrotation has been seen in 1 to 9 percent of such infants.

Major urinary tract malformations include horseshoe kidney (0 to 2 percent), hydronephrosis (1 to 16 percent), polycystic or dysplastic kidneys (1 to 3 percent), and unilateral or bilateral renal agenesis (0 to 1 percent).

. Other defects include the absence of the pituitary in up to 53 percent of infants and hypoplasia of the adrenal glands in as many as 94 percent.

When multiple anomalies are seen , genetic and chromosomal studies are also probably warranted.

this reinforces the need to advise scan periodically at the right time .

when we find something big , we have a tendency to miss others .

Whenever I had seen anencephaly earlier , that would be the end of  my efforts. But looking at the list above , the associated anomalies list is big.

The link given below is an old NEJM article on organ transplant from anencephalus babies.  Can anybody throw more light on it ?