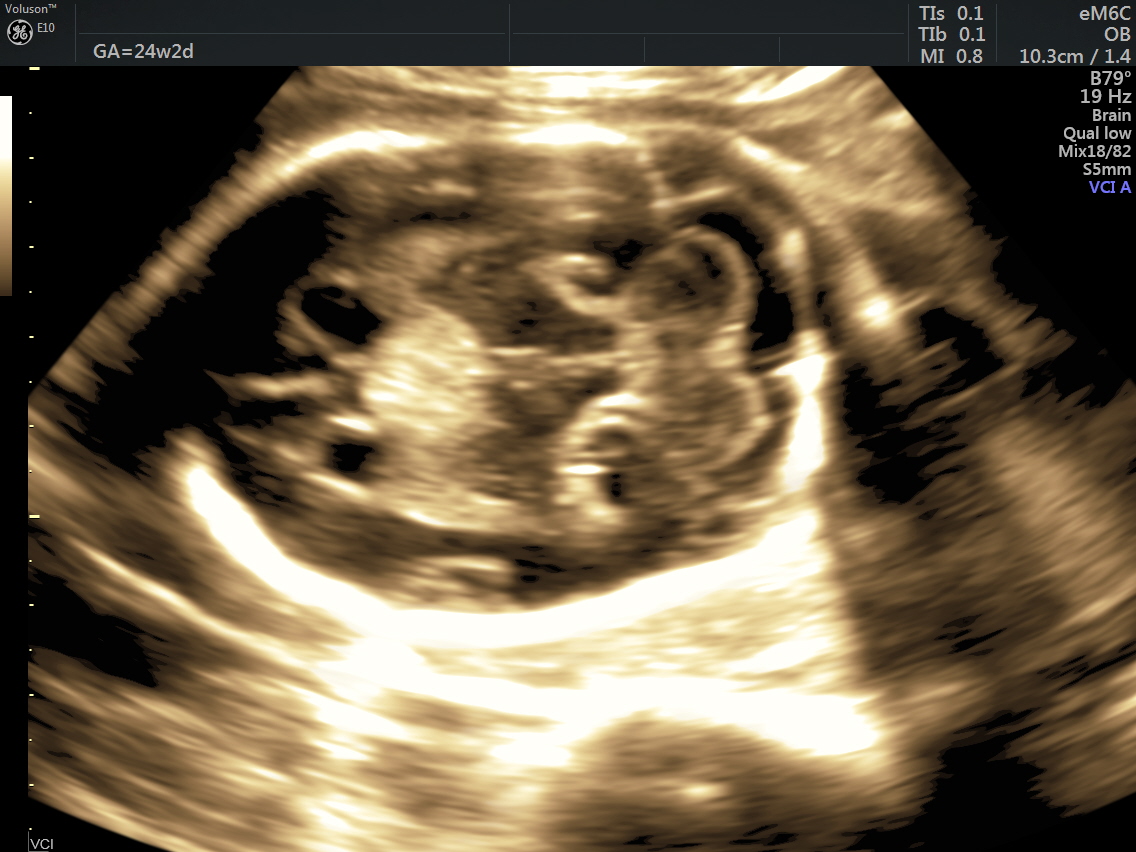 This was a 28-year-old lady, gravida 2, para 1, live 1 and nil abortion and non-consanguinous marriage. 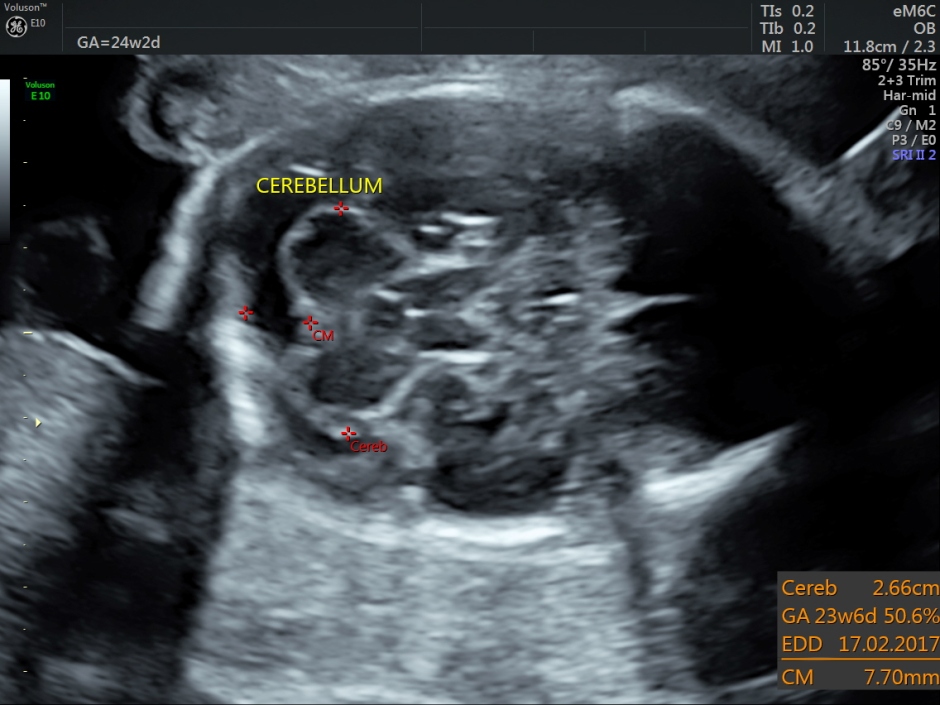 A careful look at the 3rd ventricle shows a solid mass.

Some reconstructed images are given below. 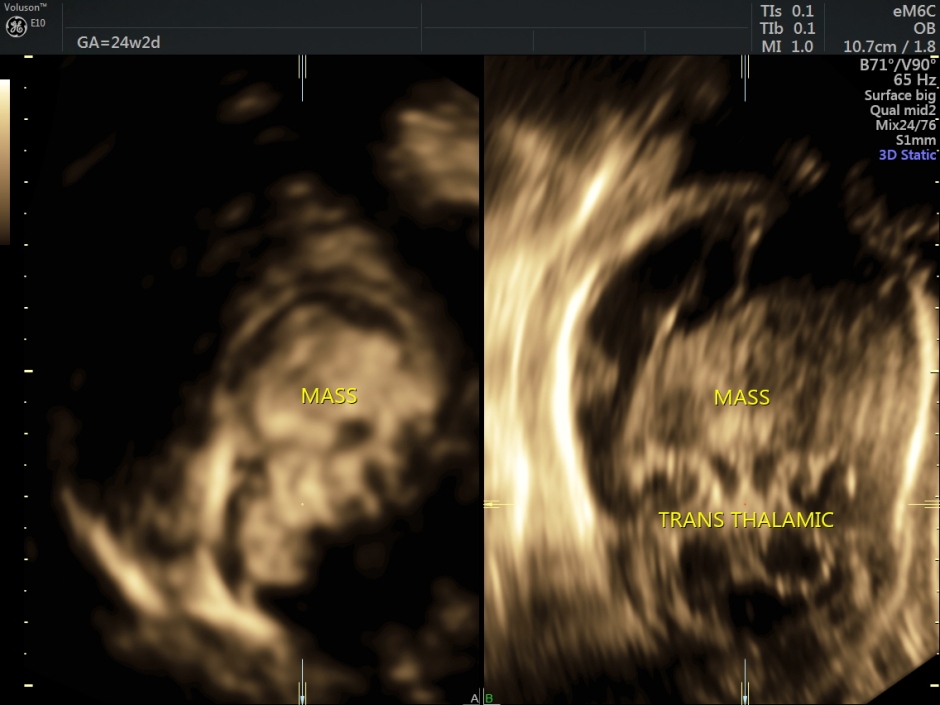 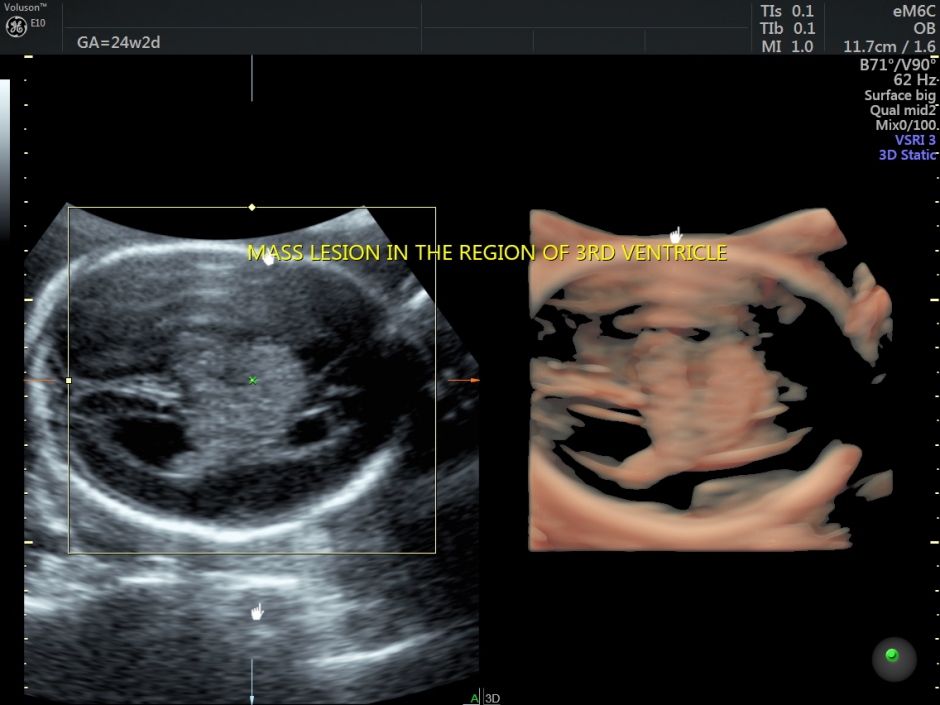 Congenital CNS tumors are divided into

Teratomas are the most frequent brain tumor found in fetuses, but their prognosis is very poor. Issacs et al reviewing 250 cases of brain tumor diagnosed during perinatal period concluded that choroid plexus papillomas, gliomas, and astrocytomas of a low degree have a better prognosis. On the other hand, teratomas and primitive neuroectodermal tumors have a bad prognosis (survival rate about 28%).

The sonographic and MRI appearance of the intracranial teratoma is usually that of an irregular solid mass, in some cases with cystic and/or calcified components, distorting brain anatomy.

Choroid plexus papilloma (CPP) is a rare and benign tumor composed of epithelial cells that line the ventricular choroid plexus and correspond to 0.4%-0.6% of fetal intracranial tumors. CPP may develop in the lateral ventricle, third ventricle, and fourth ventricle. It is generally diagnosed during the third trimester and is always associated with unilateral or bilateral ventriculomegaly. CPP has slow growth and noninvasive behavior; however, because of its specific location, CPP can block the drainage of cerebrospinal fluid and cause hydrocephalus.

An echogenic mass involving the choroid plexus is visualized on US and MRI. Color Doppler imaging may be useful to show vascularization in the lesion.

CPP may be associated with Aicardi syndrome, a dominant X-linked chromosome syndrome, defined by a triad: partial or complete agenesis of the corpus callosum, lacunar chorioretinitis, and spasms.

In this patient, reconstructed images show the corpus callosum to be formed.

CPP has a good prognosis but can become a carcinoma in 20% of cases, thus increasing the rate of mortality and morbidity.

Craniopharyngiomas are benign and represent 2%-5% of all congenital CNS tumors. They develop from remnants of squamous cells originating from Rathke’s pouch (ectodermal diverticulum originating from the upper limit of the oropharynx) and are most commonly found in the suprasellar region. Although histologically benign, tumor expansion can cause significant destruction of the brain parenchyma and hydrocephalus.

An intracranial large echogenic mass (basically indistinguishable from teratomas) is diagnosed by US. MRI can help in determining the remaining brain structures and exact localization of the tumor. The head circumference may be increased because of the size of the tumor, and hydrocephalus may be present because of secondary obstruction of cerebrospinal fluid drainage. Differential diagnoses include teratomas, astrocytomas, and hamartomas.

Fetal brain tumors are very rare and their diagnosis during the prenatal period is challenging. The suspicion of this kind of lesion arises when it is observed a space-occupying mass in the fetal brain. Modern US machines and routine US scanning during pregnancy permit early detection of these tumors during the fetal period. However, definitive diagnosis is only confirmed after birth by histology. Progress in technology has contributed to the early diagnosis of congenital CNS tumors, but the same is not observed with fetal surgery, perhaps because the prognosis of fetal brain tumors remains poor.