This was a 32-year-old lady – primi gravida . She was referred for an anomaly scan around 24 weeks gestation.Her earlier scan done in the first trimester elsewhere was reported as normal. 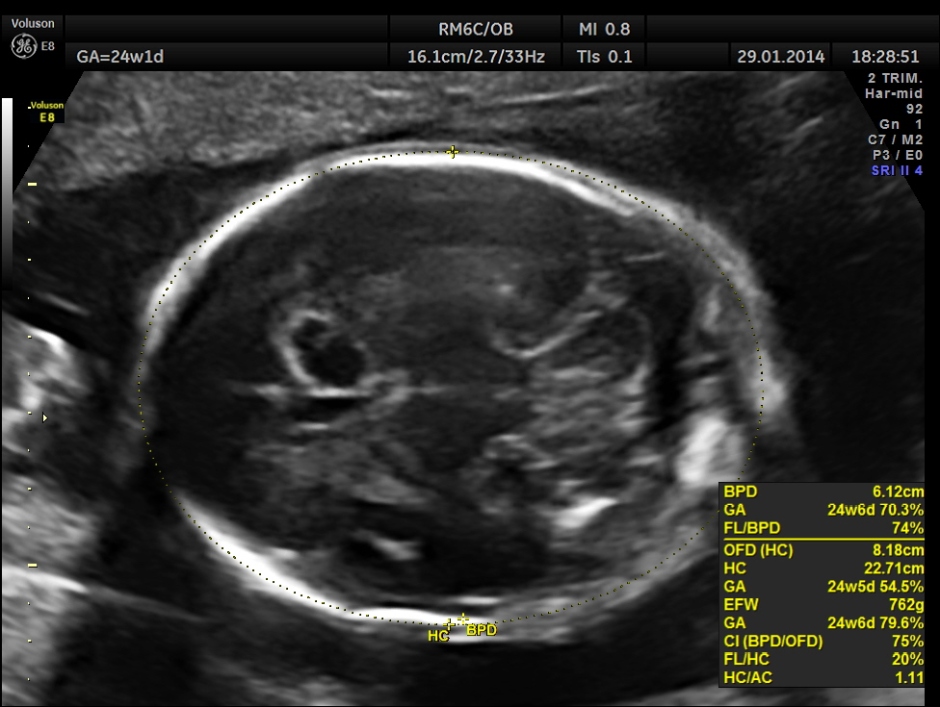 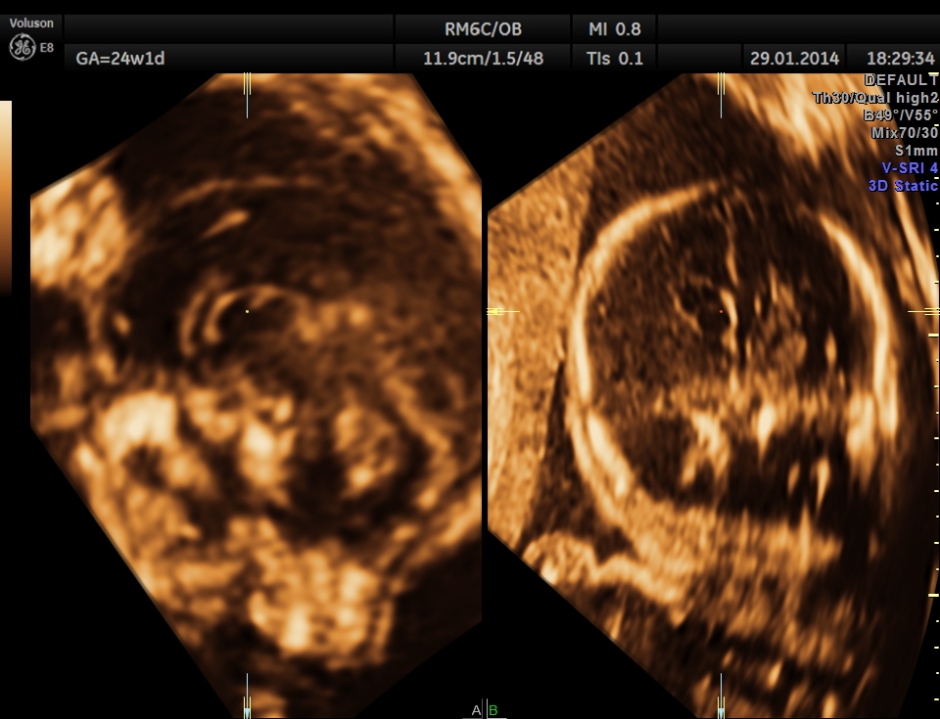 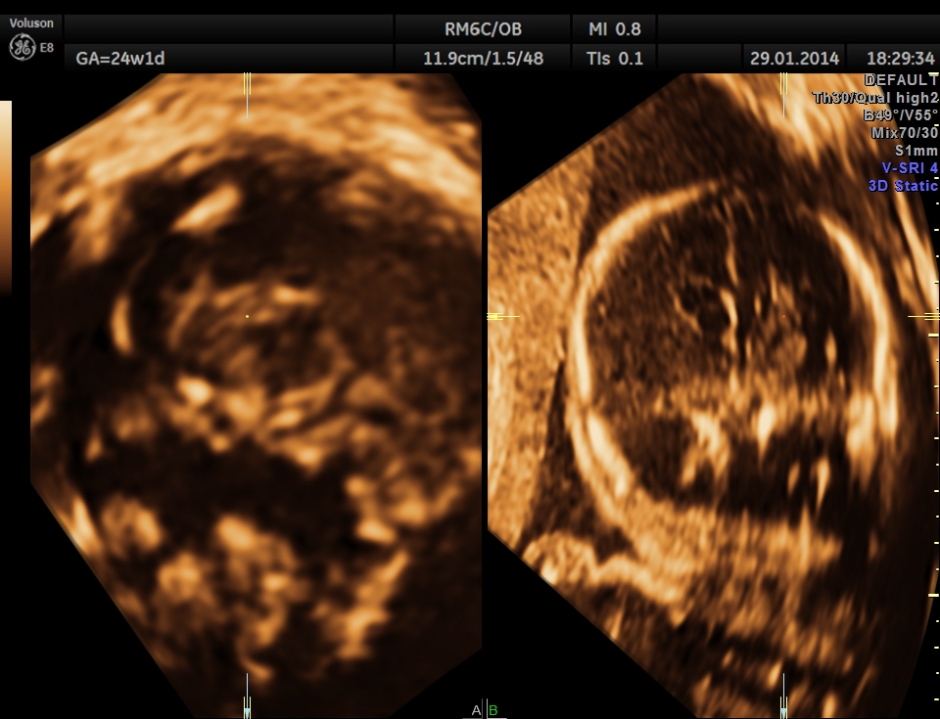 Images of the other organs are given below. 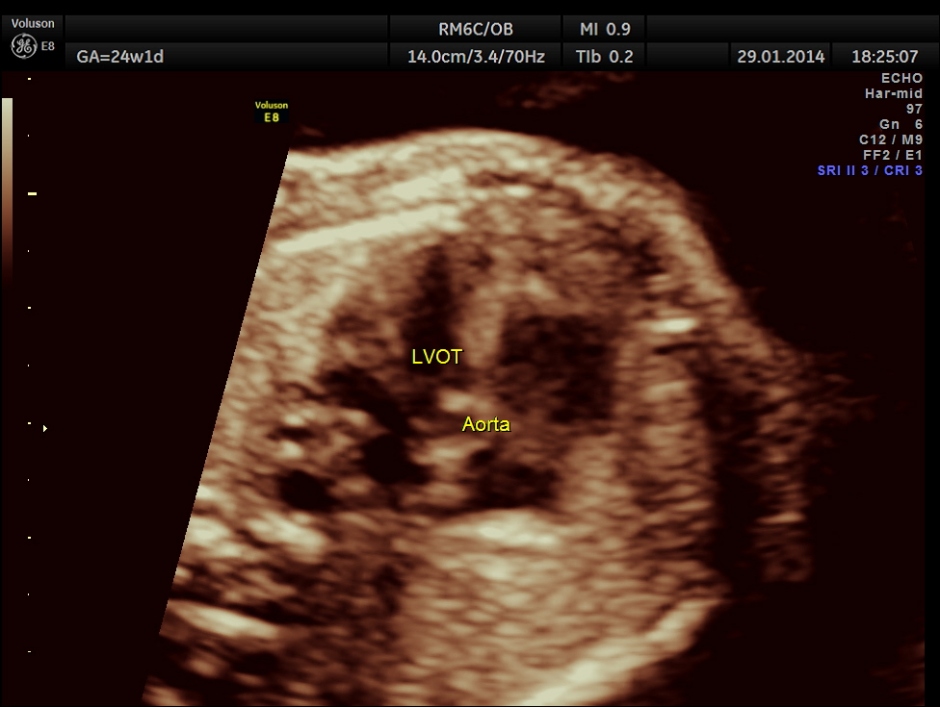 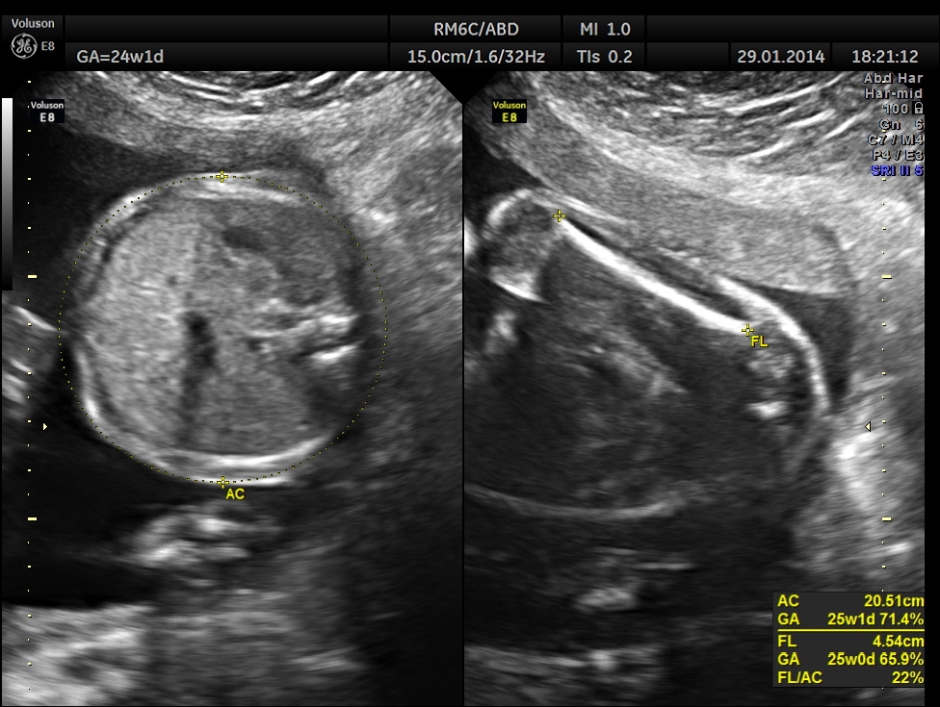 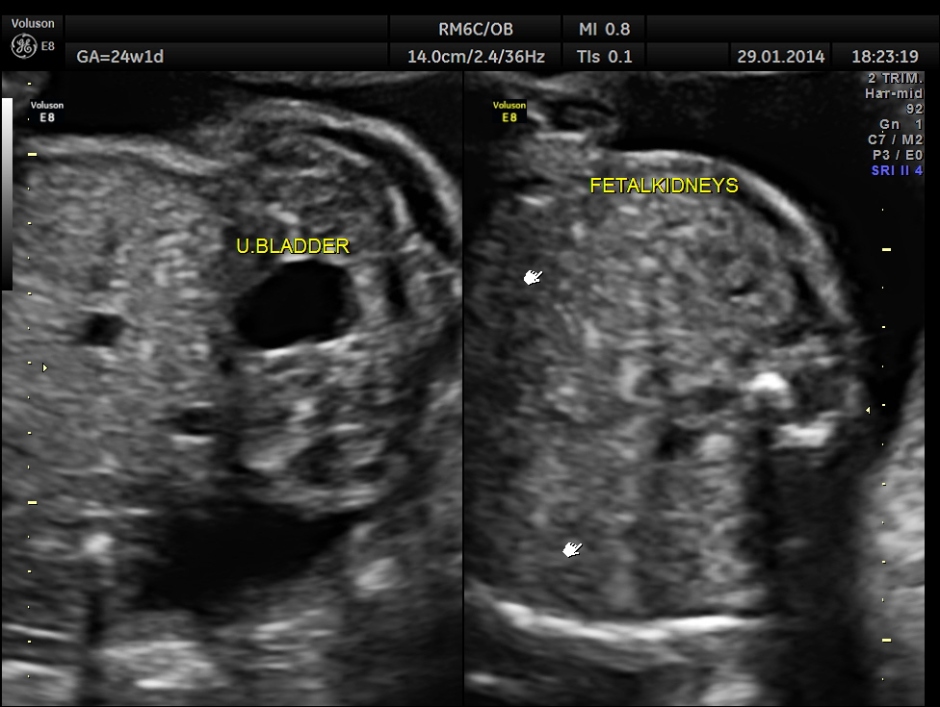 Now for a short review of the choroid plexus cyst and its significance.

Choroid plexus (CP) cysts are commonly detected on routine mid-trimester ultrasound scan. When associated anomalies are detected, the risk is sufficient to justify an invasive diagnostic test such as amniocentesis. However, the risk when no associated anomalies are detected is much less well defined. This information is required to determine the appropriate management in cases of apparently isolated CP cysts. We thought the only way to resolve the difficulties in counselling prospective parents was to conduct a prospective study in a large unselected population. A registry of fetal CP cysts detected over 3 years in the Yorkshire Region was compiled and we identified 524 CP cysts. These cases were then amalgamated and analysed with 1361 cases from prospective studies reported in the world English literature and a further 71 unpublished cases identified from a 2 year prospective series from Ninewells Hospital, Dundee. The risk of chromosomal abnormalities was 1 in 150 (95% CI 1 in 85, 1 in 261) when no fetal anatomic abnormalities, apart from the CP cysts themselves, were detected antenatally. The risk increased to approximately 1 in 3 if any other associated ultrasound abnormalities were detected antenatally. The risk did not appear to be related to whether or not cyst size diminished as gestation progresses, whether they were unilateral or bilateral, and whether they were small or large in size (60-80% < 10 mm). 76% of aneuploidic cases were trisomy 18 and 17% were trisomy 21. The risk of Down’s syndrome in fetuses with CP cysts but no other anomalies detected antenatally is 1 in 880. The probability of a chromosomal abnormality is high when CP cysts are associated with any other antenatally detected anomaly, indicating a clear need to offering amniocentesis. The predictive value is much lower when no other anomalies are detected. In such cases, it is probably advisable to regard CP cysts as an indication for detailed ultrasound assessment, rather than invasive testing.

In this patient no other associated anomaly could be made out and so she was re assured ; She came for a review 1 month later.

The unilateral choroid plexus cyst could not be seen now. No other anomaly was made out. 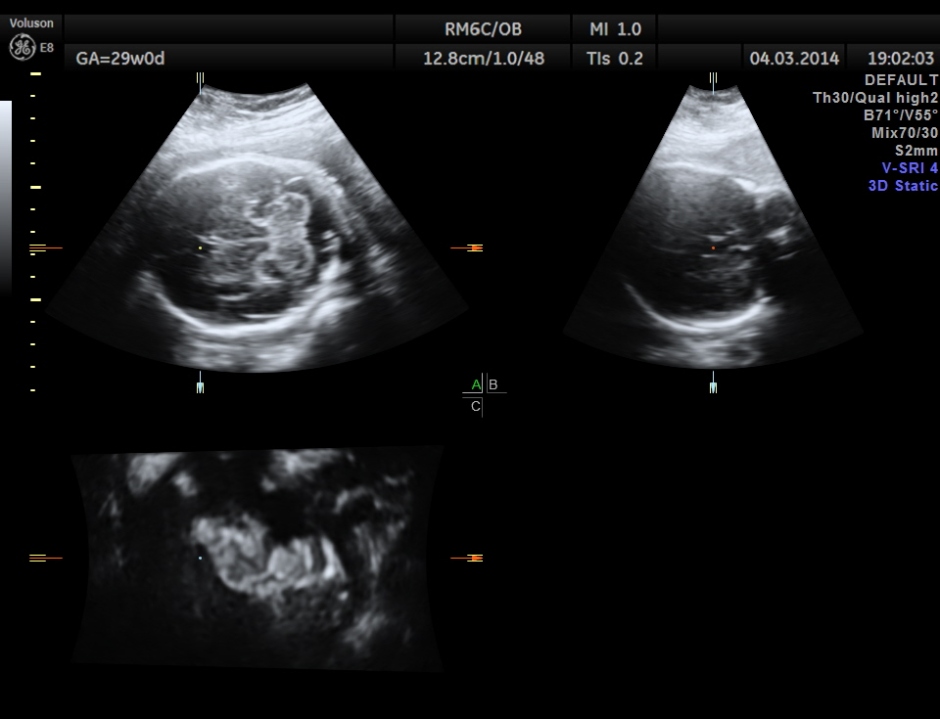 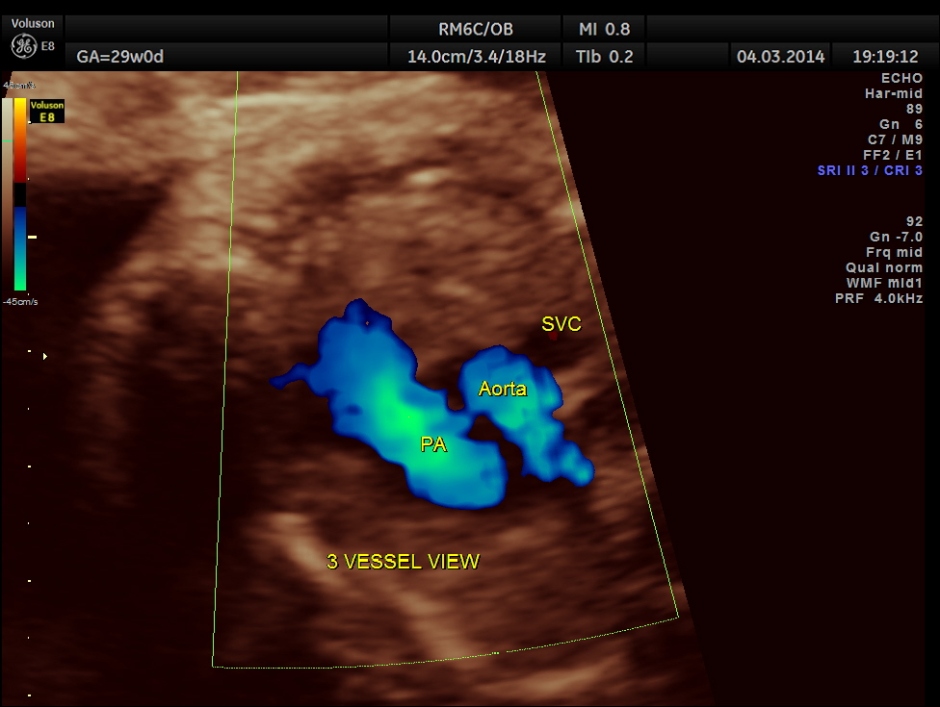 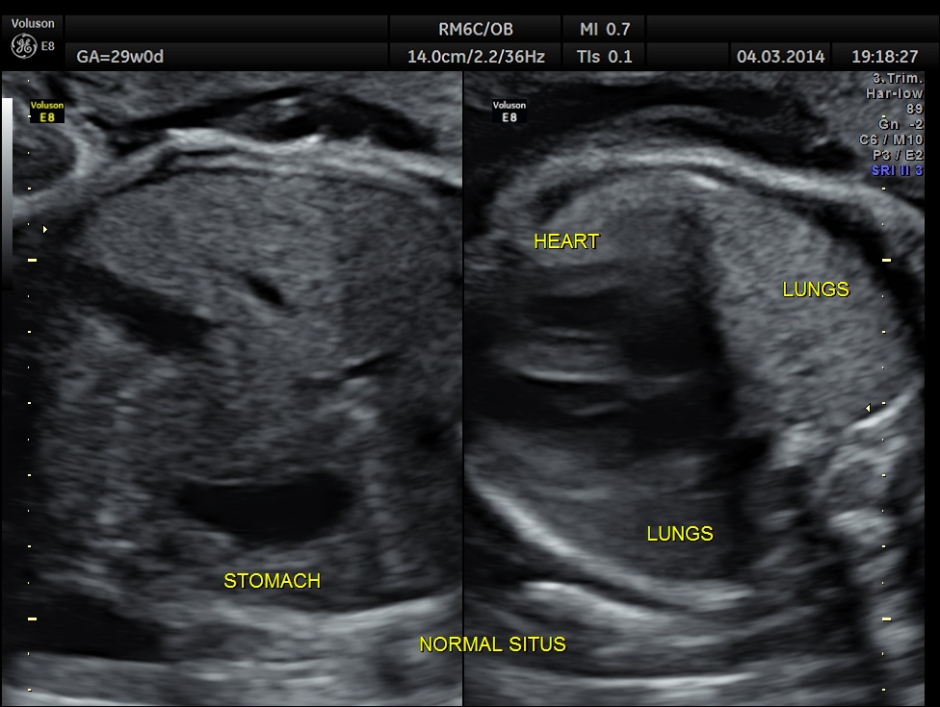 The following are taken from the site mentioned here.

When an isolated choroid plexus cyst is detected, how is counseling different for women with a normal screen versus those whose screening indicates increased risk?

Counseling for a woman after prenatal identification of a fetal choroid plexus cyst should be guided by the presence or absence of other sonographic markers or structural abnormalities, results of maternal screening for risk of trisomy 18 (if performed), and maternal age .

In women who screen negative for trisomy 18 (either first- or second-trimester screening) and in whom no other fetal structural abnormalities are visualized on a detailed ultrasound, the finding of an isolated choroid plexus cyst does not require additional genetic testing. Some experts suggest that it is unnecessary for a physician to discuss such a finding with a patient because it can be considered a normal variant.8 If it is discussed, the patient can be reassured about the extremely low risk of trisomy 18.

Noninvasive prenatal testing may be a reasonable option for women who are concerned about the procedure-related risk of pregnancy loss.

How should a woman with an isolated choroid plexus cyst be followed throughout pregnancy?